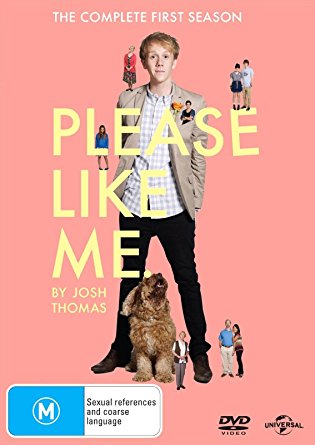 Written by and starring Australia’s favourite young comedian, Josh Thomas, Please Like Me is a uniquely honest comedy / drama series.

With his 21st birthday just around the corner, life finally seems to be coming together for Josh (Josh Thomas). He’s sharing a house with his best (and only) friend, Tom (Tom Ward), his dog, John, and Tom’s rabbit, $haniqua and he’s doing adult things like cooking roast chickens and eating asparagus.

But the events of one day throw his world into chaos. He’s dumped by his girlfriend, Claire (Caitlin Stasey), and introduced to a decidedly odd but very attractive man, Geoffrey (Wade Briggs). And when his divorced mum, Rose (Debra Lawrance), overdoses on pain killers, Josh is forced to move back into the family home to keep an eye on her. If that’s not enough, he has to deal with his dad Alan’s (David Roberts) guilt over his ex-wife and clumsy attempts to hide his new, younger girlfriend, Mae (Renee Lim). It’s all a bit more than Josh had planned for – which was just to plate up a tasty dinner.

All of a sudden it seems as though everyone’s lives are in disarray and Josh is at the centre of it all. For someone with an aversion to confrontation, drama and emotion in general, there are some big challenges ahead for Josh – challenges he can only deal with in his own awkward, self-centered, and always hilariously frank way.

Based on the Award-winning comedy of Josh Thomas, the six-part series Please Like Me is about cavoodles, custard tarts, boyfriends and girlfriends. Mostly, though, it’s about growing up quickly and realizing your parents are not heroes, but big dopes with no idea what’s going on – just like you.